E cigarette use (vaping) continues to be highly disruptive to smoked cigarettes and presents a fraction of the harm. Creating an environment where smokers can use this much less harmful alternative to manage nicotine addiction is likely to have a significant impact on chronic disease prevention in New Zealand, especially for Maori, Pacific and low-income populations.

We now have evidence of the impact vaping has had on smoking.  The New Zealand Health Survey was released on 1 December 2021 and evidences smoking going down as the less harmful vaping goes up. 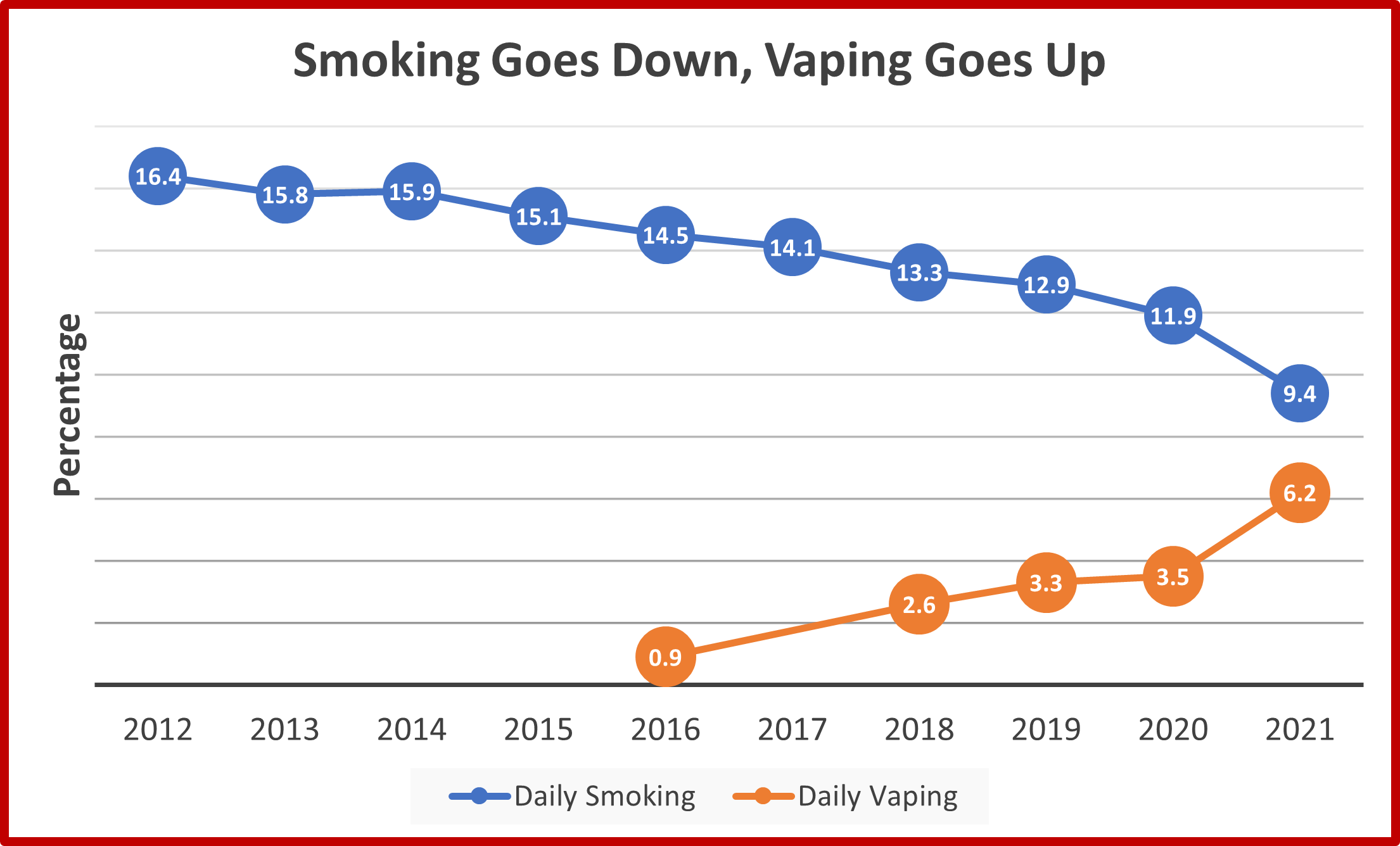 What the NZ Government and the Ministry of Health says

New Zealand has a harm reduction approach to vaping

The Ministry of Health says that "vaping is much less harmful than smoking" and "...can help some people to quit smoking."  It also says, "Vaping has the potential to help people quit smoking and contribute to New Zealand’s Smokefree 2025 goal."

The Government has produced information to help those who are smoking cigarettes transition to vaping.  See it's Vaping Facts


Nicotine is addictive, smoke is harmful

Smoked cigarettes are highly addictive because of their nicotine content, and the mechanism by which nicotine is administered to the brain through combustion and inhalation of smoke.

Very few, if any substances are as addictive as nicotine when delivered via a cigarette. This delivery mechanism is extremely efficient, modifies brain receptors and creates a very high level of dependency.

The nicotine itself is not harmful when delivered in this way, although it creates a dependence. But is the by-product of combustion that causes harm because the smoke contains multiple carcinogens, and leave deposits on the respiratory systems that severely impact on cardiovascular and respiratory function.

The addictiveness of smoked tobacco is evidenced in the very low rates of successful quitting, and high rates of relapse to smoking. The average sustained abstinence rates for quitting smoking ‘cold turkey’ at one year is approximately 0.4% of quitters.

Whilst clinical forms of nicotine such as patches, gum and lozenges have been available for many years as quit aids they have a fraction of the efficiency that smoking has in delivering nicotine. Combined with behavioural support, success rates remain low with sustained abstinence at around 1.6% of quitters[i].


Vaping is more efficient at managing dependence on smoked cigarettes

There is increasing evidence that vaping is significantly accelerating the decline in smoking in countries where e-cigarettes are permitted.

Vaping delivers a vapour composed mostly of propylene glycol (also used in asthma inhalers) and flavouring agents. Some, but not all, contain nicotine. The current generation of vaping devices normally work using a tank of vaping liquid that is heated into a vapour and inhaled. The nicotine delivery is much more efficient than clinical products, and mimics the inhalation delivery mechanism of smoking.

In the last year, in Aoteoroa New Zealand, we have seen the largest decrease in smoked cigarette use as vaping has increased.

In the UK 45% of vapers are current smokers, and 52% are ex-smokers. The UK smoking monitors estimates that over 2.9 million people in the UK vape, and over 1.3 million have quit smoking altogether. Long term ex-smokers are 3 times more likely to report having used an e-cigarette than NRT[iv].

The Cochrane Tobacco Addiction Group concludes that switching to vaping is likely to lead to significant improvements in health[ii].

Vaping lacks the most harmful components of conventional cigarettes. Public Health England concluded that they are 95% less harmful than cigarettes, but substantially more effective in delivering nicotine than medicinal nicotine products[iii]. This helps manage nicotine withdrawal with a fraction of the harm from tobacco, and delivered in a way that is far more acceptable to many smokers who want to quit.

Whilst vaping is clearly less harmful than smoking, this does not mean it is harm-free.

Whilst there are concerns about vaping being a gateway into smoking, there is no evidence of this, particularly for youth.

To find out about youth vaping, see the ASH Year 10 Survey that annually surveys youth and their vaping habits.  Click HERE